MadMax cruises at Island of Elba

Discover the exclusive advantages of a MadMax cruise

Catamarans for cruises on the Island of Elba,
Tuscan archipelago and northern Corsica.

The island of Elba is an ideal destination for a sail boat holiday. The light winds, calm sea and small distance from the Tuscan coast are attractions that can lure anyone to life on the sea; without even considering the beauty of some of the coves difficult to reach by land.

Hiring a catamaran is an unmissable opportunity to visit the island of Elba from a different view point, to navigate its coastline letting yourself be lulled by the waves, to explore secret and fascinating ravines.

A holiday for everyone: from families with children who love to dive into calm waters near the coast, to groups of friends who want to experience the emotions of a dawn deep sea fishing trip, to the couples looking for a little privacy and romantic sunsets.

ASK FOR INFORMATION ABOUT THIS CRUISE

Itineraries for cruises to the Island of Elba, the Tuscan Archipelago and northern Corsica. 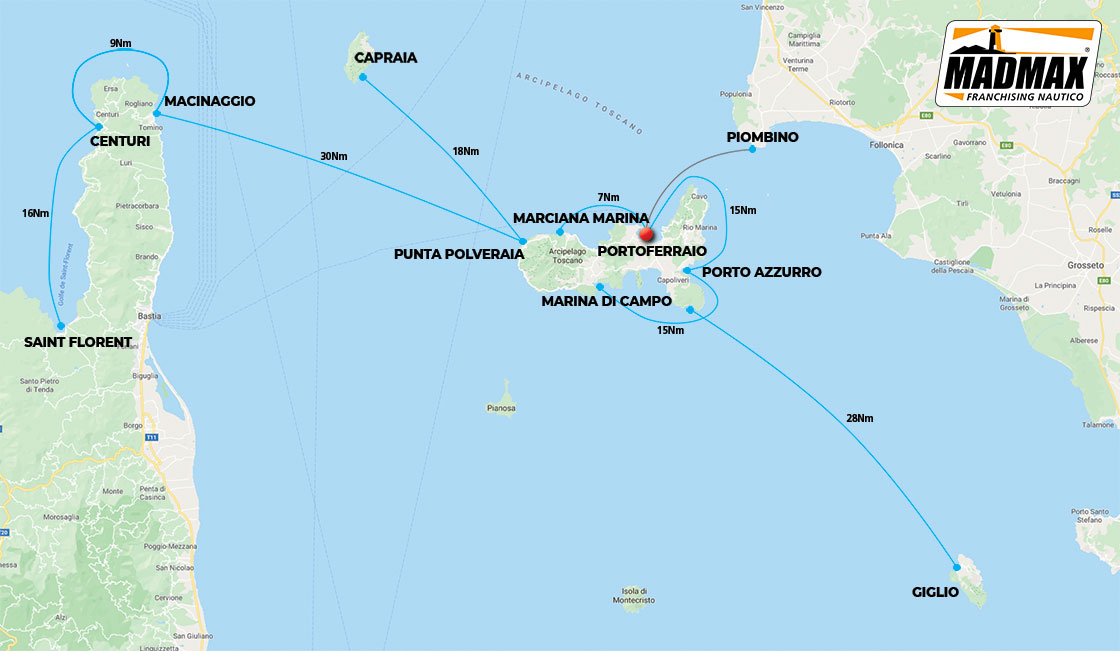 Entire trip between Portoferraio and the Capo d’Enfola moves you along the famous white beaches of Elba, a marvelous stretch of coast which offers dramatic cliffs and occasional picturesque beaches of white pebbles lapped by a sea of incredibly beautiful and bright colours.

One of the islands most picturesque villages, captured like a precious jewel within the rocky cliffs.
On one side we find the old port and on the other the small tourist port, both protected by the fortified Medicean tower.

This section of coast on the island of Elba is characterized by the presence of small wild coves of indubitable fascination, immersed in the surrounding uncontaminated nature, mainly approachable only by sea. Natural fascination is sparked by the wild beauty of the area and the crystal clear waters as well as the beaches valued for their tranquility.

Has the longest sandy beach (1,850 meters) on the island of Elba, a beach that slopes gently into the water, with multiple shallows, which makes this beach among the favorites for families with children. It faces the gulf  of Marina di Campo, in the centre of the southern coast of Elba, with the island of Montecristo on the horizon.

A boat provides an excellent view point for spotting dolphins and other large sea creatures which live in the area around the island. Studded with small rock coves, lapped by the crystal clear waters of the sea which allow you to admire the sea floor.

In a cove protected by the gulf of ‘Mola’, historically used as a natural docking point on the maritime sea lanes of the Tirreno sea. At the beginning of the 16th century it was fortified by the Spanish in order to guarantee the safety of its military and commercial ship convoys.

The Island of Giglio

Island of Giglio is located in the Tuscan archipelago in front of mount Argentario, it is certainly an island to discover. Offering tourists and sea lovers beautiful beaches and inlets.
The crystal clear waters offer a fascinating under water world for passionate divers, its land (still 90% wild) invite you to enjoy ample trekking and mountain biking paths.

ASK FOR INFORMATION ABOUT YOUR CATAMARAN HOLIDAY AT ISLAND OF ELBA

I must congratulate the crew for the careful cleaning of the rooms and the service worthy of a luxury hotel. Things not normally so obvious when it comes to sailing holidays. Nothing to complain even in the choice of the itinerary, but in this case the skipper is helped by nature.

A serious and competent renting company. A very good experience for our very first time in Italy. Thank you MadMax!

We have experienced an awesome week on MadMax Catamaran. Croatian sea is fabulous and the Skipper was expert and helpful. We will do it again, that’s for sure!

The most beautiful Mediterranean Sea

Thank you Madmax for having us and let us sail in this warm and colorful sea. This Holiday was successful! Soon we will return to Italy to meet you again.

See you again next year

We choose this Company for next year again cause we really enjoy our stay. The Skipper was so kind and funny. He took us visiting wonderful places that we saw only in movies!

IT HAS BEEN A VERY NICE HOLIDAY!

The catamaran was clean and the skipper on board very kind and professional. We have seen two bays a day, always slept in a shelter bay chosen from the skipper. Even in strong wind the skipper always found very good shelters.

Unfortunately, we were unable to go on the holiday. However, throughout the chartering process, I had consistent contact with the staff at MadMax. They insured that our needs were taken care and had fantastic itinerary suggestions. Due to the UK and Italian quarantines, they promptly offered a refund or voucher on our trip with no holes to jump through. This was very reassuring during the ongoing pandemic and should we rebook this or next year, it will certainly be with MadMax.

No worries for Covid, the catamaran is always sanitized with Ozone. Very nice and spacious inside and outside, even with all-inclusive bar. The best way for visiting Mediterranean Sea and its beautiful lands.

This site uses first-party (own) technical cookies necessary for its proper functioning; only with the consent of the User may also use analysis and / or profiling cookies or other tracking tools in order to send advertising messages, or to modulate the provision of the service in a personalized way. Closing the banner by clicking on the button I ACCEPT ESSENTIAL COOKIES ONLY involves the continuation of navigation only with technical cookies.
I ACCEPT ESSENTIAL COOKIES ONLY
Cookies Preferences
Cookie Box Settings
Cookie Box Settings

Decide which cookies you want to allow. You can change these settings at any time. However, this can result in some functions no longer being available. For information on deleting the cookies, please consult your browser’s help function.

With the slider, you can enable or disable different types of cookies: